I'll try and keep from waffling too much but I want to be as detailed as I can on this main post.
For some background, my car (2005 Mondeo 2.0 TDCI) had been on limp mode since I bought it in early December. This turned out to be because someone had removed the injectors (likely for cleaning) and reinserted them in the wrong order and all I had to do was recode the injectors in the new order, good as new (shoutout to those on TF who helped me through that!) Note, I didn't get round to performing a leak off test and it seemed my injectors were all happy once they were coded in the right order.

Before and since then, I've been flushing the fuel system with Red X fuel system cleaner with night and day results (strongly recommended).
On the day it spluttered to a halt on the motorway (misfire + smoke then complete shut-off. no restart), and for 2 days prior, the car was unhappy at idle (RPM would vary by about 10 0rpm or so constantly, something I put down to the loose alternator belt causing a variation in engine load) and it became much easier to stall.
As far as I could tell from city driving, there wasn't any power loss or hesitation at any speed above 1.3k ish rpm.

On about my 3rd overtake on the motorway (55ish to 70) at full throttle and max boost the miss firing and subsequent cut off occurred.
Bear in mind this was the third time (all 3 in the same 10 min window) that this car has been at max power and max throttle since at least early December 2021 when I bought it.

After getting a tow home, I plugged my tunnel rat into my laptop and got codes P2291 and P0251, both on my Powertrain Control Module reporting low fuel pressure (see photos attached).
After recharging my battery (ran out trying to crank and stay warm on the motorway), I went back out today and managed to hit the 250 rpm crank speed needed to start but my Fuel Rail Pressure was a measly 435 PSI peak (30 bar) and just 87 PSI (6 bar) when the ignition is on. Again, see the pics attached of my OBD ll scanner

Returning to my point of failure and the months leading up to this, this car had been in limp mode for god knows how long and probably never had any sort of injector cleaner or fuel system cleaner in it at all and god only knows when the fuel filter was last changed.
This leads me to believe that giving her the beans with the Red X flushing the system meant that I dislodged some goop in the system that has subsequently blocked up my fuel filter of unknown age. Something Forscan lists as a potential cause.

Alternatively, given the recent poor idle I mentioned previously, my high-pressure pump might have given up the ghost when it was at max pressure. Hopefully not but we can't rule it out...

I'm more than happy to hear other people's suggestions as to the root cause and I appreciate your ideas.

I'm afraid so, back at it again with a fuelling issue!

I've cleared the errors and they've returned and I have a new filter on the way (I was going to do it last month but I've been putting it off.)
As for the pressure test, I've seen other threads mentioning the same thing. Should I try that before or after I change the filter?

I was in the overtaking late at the time it died so I had to bail quick (plus I thought the timing chain had gone) but if it ever happens again I'll try your trick and cross my fingers!

Joined Jun 13, 2010
·
4,705 Posts
Yeah, just press in the clutch, coast and turn key to position 1, and restart.
I'd do a leak off straight away! But make sure you cap the disconnected leakoff pipes! Else you get an airlock which will circulate through the fuel filter and cause you grief! (been there, had grief...)

Joined 5 mo ago
·
99 Posts
Oh boy I can imagine, I saw another thread where someone did that and it looked to cause him a lotta hurt.
Fuel filter is not like to be here before the next weekend so I'll be without answers for a while, pain...

Joined Jun 13, 2010
·
4,705 Posts
You can still do a pump pressure test anytime!... Bought a leakoff test kit yet?
You need one with these blue/purple connectors, not the brass ones. You only need 4, some clear tubing - aquarium tubing will do - and bottles - I bought some hamster water bottles for mine. I bought my connector from my local diesel engineer company, but I bet you'll find 'em on ebay. You need the little white caps on them too... You need them to cap off the disconnected leak-off pipes. 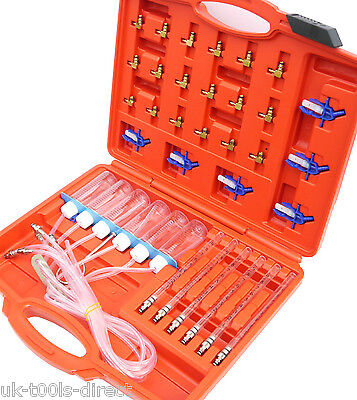 Is there a way I can perform a leak off test without a running car and/or with my woeful fuel pressure? She's a non-starter at the moment.

As for my pumps, I know that my cranking FRP is waaaay too low (30 bar) but I don't know what my priming pressure should be? Currently 6 bar sustained with the ignition on.

I hope that I can pindown which pump (lift or high pressure) is the culprit by looking at these numbers, assuming they are at fault here.

Joined Nov 10, 2004
·
31,063 Posts
Yes you can leakoff test without the engine running. You crank the engine over and measure the distance the
fuel travels up the pipes.

Joined 5 mo ago
·
99 Posts
with only 30 bar would I get reliable results still? I guess if one is so buggered I'm getting such low pressure it would make sense still. How far should I expect to see it travel? or am I looking for one that stands out?

I haven't taken the filter out yet, new one is en route. Still have a quarter tank and I am getting some pressure so I guess that would rule out a faulty fuel gauge?

Joined Jun 13, 2010
·
4,705 Posts
hope that I can pindown which pump (lift or high pressure) is the culprit by looking at these numbers, assuming they are at fault here.

There isn't a lift pump... just the one pump that has a low and a high pressure section.
You could have one bad injector that is taking all the pressure, it's a pity that there is no way to cap off the ports on the common rail so as to eliminate the injectors when testing the high pressure pump. There's a YouTube vid where someone cut and silver soldered the ends of some cut pipes to be able to blank off the common rail ports in order to eliminate the injectors and test the pressure from the pump. Ingenious.

nicam49 said:
There isn't a lift pump... just the one pump that has a low and a high pressure section.
Click to expand...

My bad, I assumed that's what this is? It is for my car (searced by reg), and it's listed separately to the high-pressure pump. So there is only one pump in the TDCI? No feed pump or anything?
D

thomascaswell said:
with only 30 bar would I get reliable results still? I guess if one is so buggered I'm getting such low pressure it would make sense still. How far should I expect to see it travel? or am I looking for one that stands out?

I haven't taken the filter out yet, new one is en route. Still have a quarter tank and I am getting some pressure so I guess that would rule out a faulty fuel gauge?
Click to expand...

Read this especially reply #9 from Peter Scott. It explains how to do a static leakoff test.

Chaps, Unfortunately it looks like I've fallen foul of the dreaded fuelling system gremlins :( I had a problem about 18 months ago where the car would "hiccup" and the glow-plug light would come on when accelerating. Replaced the fuel filter and that seemed fixed. The problem re-emerged about...

Joined Jun 13, 2010
·
4,705 Posts
Also, re the lift pump...... cross-referencing those Ford part numbers with Google, all 'hits' include the TDCi 2.2....!?
The way to resolve this for sure is to go on catcar.info, enter your vin, and browse thro' the diagrams of parts specifically for your car. Most of us on here have experience of the 2litre TDCi, not the 2.2. Do let us know what you find for future reference!

Joined 5 mo ago
·
99 Posts
Yeah, min is the 2005 2.0 Duratorq TDCi model, not the 2.2.
Thanks for the link, I'll save his comment for when the test kit arrives.
Looks like others have had luck replacing the filter but I'll be sure to cut it open and look for filings when the replacement finally arives

Joined 5 mo ago
·
99 Posts
Looks like we have the same model no? Except mine is a 2005. Could I assume that I have two pumps then? one to draw from the tank and then my high-low pressure combo

Joined 5 mo ago
·
99 Posts
I must be getting muddled then, there's so many varients of these cars!

When your pump went bang, assuming that's why you're transplanting it, what were the symptoms leading up to it?
I had rough idle and it was easy to stall in the days leading up to the no-pressure situation I'm in now, does that match what happened to you?
1 - 20 of 133 Posts
Join the discussion
Continue with Facebook
Continue with Google
or sign up with email
About this Discussion
132 Replies
6 Participants
Last post:
thomascaswell 7 d ago
Ford Automobiles Forum
A forum community dedicated to all Ford owners and enthusiasts. Come join the discussion about news, reviews, performance, modifications, classifieds, troubleshooting, maintenance, and more!
Full Forum Listing
Explore Our Forums
Diesel Engines (Mondeo Mk3) General Car Talk Electrical (Mk3 Mondeo) Suspension/Wheels/Brakes/Steering (Mk3 Mondeo) Car Care / Restoration / Paint
Recommended Communities